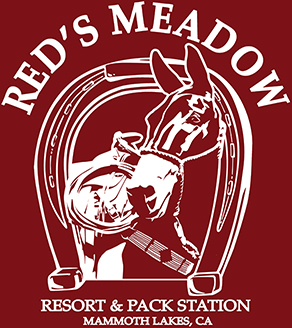 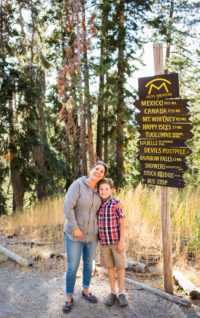 In the 1870’s the French Trail, a toll trail, passed through Red’s Meadow allowing a route for gold miners and fortunate seekers to pass through the Sierra. The route was used earlier by the nomadic Paiute Indians as hunting and trading between east and west.

Red Sotcher himself homesteaded Red’s Meadow and raised vegetables in the nearby meadow, which he sold to the mining community in Mammoth. He also traded in cattle and horses, developing an interesting reputation for the source of acquisition of these animals. The road to Red’s Meadow was created in 1929 by miners with a claim near Minaret Lake. The mine soon failed after a great promotional scheme (earlier radio messages during the winter from the mine enticed Orange Country Investors to buy stock in the mine). After the failure of the mine the road remained. At first the road was operated as a toll road with a $1.00 charge.

In 1934 Archie Mahan left the Mammoth mining business and started Red’s Meadow Resort. He and his wife Gladys and family operated Red’s Meadow through the depression of the 30’s and WWII, until 1959, a span of 27 years. Archie Mahan operated the Mammoth Consolidated Mine, which is now a Town of Mammoth historical site near Lake Mary. Archie served as a Mono County Supervisor for 20 years and never was opposed by anyone in any election. He ended his public service career as the Vice President of the National Association of County Supervisors, representing the 13 Western States. In 1960, the Tanner family took over the operation of Red’s.

John Wayne’s leading role in the movie “The Trail Beyond,” was filmed at Rainbow Falls in 1935. “How the West Was Won,” and “North to Alaska” are just two of the films in which Red’s Meadow horses were used. 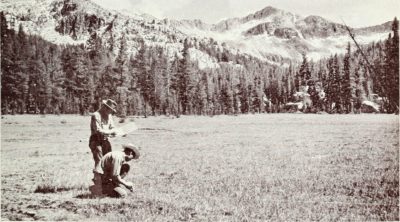 In 1972, a trans-Sierra road was proposed through Red’s Meadow from the Fresno area to Mammoth Lakes. President Nixon signed an executive order to stop development and  Governor Ronald Reagan came to Red’s Meadow. A party of 100 horsemen including politicians and news media made the trip to Summit Meadow to receive the document read by Governor Reagan and signed by President Nixon, that there would be no further expenditures of funds in the development of this road. This allowed sufficient time for congress to expand the Minarets Wilderness (now known as the Ansel Adams Wilderness), which now joins the John Muir Wilderness, thus eliminating the corridor for a road and preserving the integrity of the John Muir Trail. This creates the longest contiguous Wilderness area in the 48 states. Ike Livermore, secretary of Resources for the State of California during the Reagan Administration, deserves the vast amount of credit for preventing the road. 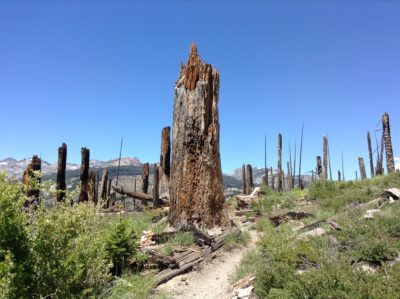 On August 21, 1992, a lightening fire started about 6 miles below Red’s Meadow on the San Joaquin River. Fortunately, due to the heroic efforts of the local volunteer fire departments, the Rainbow Fire was fought successfully at Red’s Meadow Corral and Resort and all was preserved as well as the adjacent valley.

Since the completion of the Pacific Crest Trail (PCT) in 1993, Red’s Meadow has become a well-known resting spot for hikers tackling the 2,663 mile trail. Red’s Meadow rests at the 906-mile mark on the trail, offering a hot meal, ice cream, and beer to those passing through. The PCT was founded so as to link trails in California, Oregon and Washington together to create one trail stretching from Mexico to Canada. One of the trails used to link the monster trail is the John Muir Trail (JMT).

Today, Red’s Meadow Resort & Pack Station and Agnew Meadows Pack Station, the Tanner family realizes that you – our guest, has made the place what it is today – as a family we continue to put an emphasis on dedication to customer service and quality products. A second and third generation of the family, and a dedicated staff, continue to blend old-fashioned service and experience with the latest technology and equipment. We welcome all.

Since the completion of the Pacific Crest Trail (PCT) in 1993, Red’s Meadow has become a well-known resting spot for hikers tackling the 2,650-mile trail. Red’s Meadow rests at the 900-mile mark on the trail, offering a hot meal, hot showers, ice cream, and beer to those passing through.

If you are a hiker on the John Muir Trail or Pacific Crest Trail, you can send yourself a resupply package here!